A farthing’s worth of sweets please!

I mentioned the other day how nice it is being contacted by former, current and future residents! Often living locally, but sometimes living the on other side of the world - it’s fascinating reading the many stories and memories of people with connections to the Hoo Peninsula.

Last week I was contacted by Margaret Hill (nee Ross) who moved away from the area to County Durham in 1968. Margaret lived in Hoo as a girl and has fond memories of living in the area. I was really interested to learn of her connections to some well known local family names, including Miskin, Blackman, Pointer (or Poynter) and Flack.

Margaret told me she is directly related to the Cruttenden family. Her grandfather, William, was founder member of the Hoo Silver Band (pictured below). His wife, Kate, was an officer in the Salvation Army, based at their hall near Crawfords Cottages in Hoo (roughly where the Red Cross Hall is today). Apparently, William and Kate Cruttenden had 9 children. 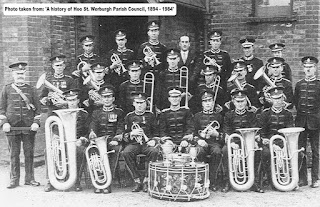 Margaret got in touch after seeing the ‘Then and Now’ photo series I featured recently, looking at locations along Stoke Road, particularly the old photo of the now demolished Carpet Shop. When Margaret’s grandmother lived in Crawfords Cottages, the shop sold vegetables and sweets - and she has fond memories of crossing the road for a farthing’s worth of sweets.
'High Street', now called Stoke Road, looking west (with Crawfords Cottages to the right). 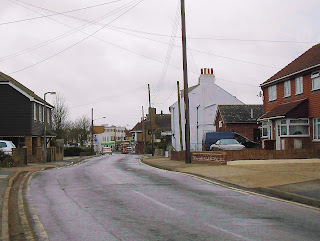 The same view today.
It was particularly funny to read Margaret’s story of a time when she got cross with her mother, packed a suitcase and, at just 4 years old, left home! She went as far as her aunt’s house, who lived in Abbots Court. Margaret lived along Main Road, near to St. Werburgh Crescent, so I suppose this is quite a distance for someone so young. But she says her mother always knew where to find her! 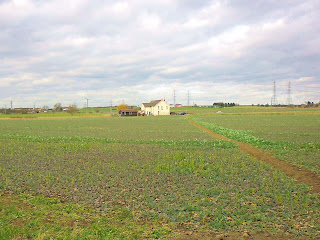 A view from Abbots Court Road. 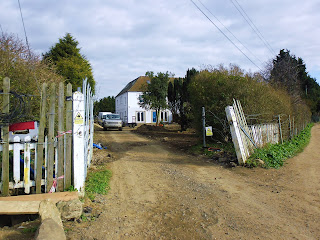 Abbots Court, currently under renovation.
Thank you Margaret for getting in touch - I really enjoyed reading your memories of the area.
Would you like to share your stories, memories or old photos of the area? Just get in touch via the contact page.
Posted by Tony Watson on Wednesday, February 22, 2012