The 'muddies' certainly were - they had to be!

Back in the late 1800s and early 1900s, gangs of men from local villages competed for the much sought after, though incredibly exhausting, job of digging clay or ‘mud’ from the marshes and saltings of the River Medway. The men were known as the 'muddies'. 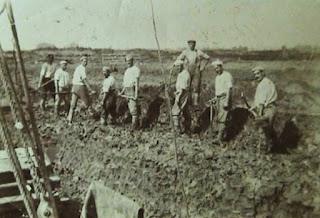 The muddies had to load up to one hundred tonnes of clay, from sites including Hoo Flats and Stoke Saltings, onto barges for transportation up the river to one of the many cement works.

It was clearly a very tough job, and many of those men suffered unimaginable health problems as a result. Reports describe men suffering from chronic rheumatism, arthritis, sprained wrists and strained backs. Many also suffered from ’scaffleman’ - torn skin on parts of the back, as a result of continual lifting, turning and throwing. Calluses on hands, sometimes causing fingers to join together, were a common result of the constant use, and rubbing, of a spade. 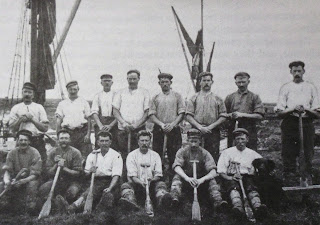 Despite this, the men would only ever take a few days off work to repair serious damage to their bodies - no health and safety or 48 hour working week regulations around then! 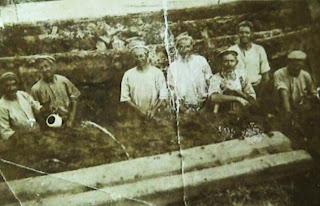 The only consolation was that it was one of the best paid jobs around, paying much more than farm labourers earned. Muddies kept the work within a tight knit circle - with the work normally becoming a father and son tradition in many families. 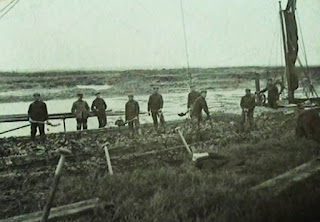 At the height of this local industry, in the early 1900s, a barge load (100 tonnes) of clay would earn the men 35 shillings - shared out amongst a gang of about 10 muddies. They could often load two barges every low tide and, it is said, there would always be about 50 barges waiting to be loaded on the Stoke Marshes at any one time. 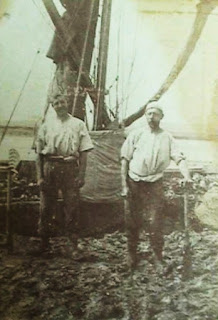 The income they earned was sufficient for many of the muddies to buy pubs once they had finally laid down their shovels. This is quite possibly the case with my great great grandfather, Henry Spencer. Described as a ‘Cement Labourer’ in several census documents, I can’t imagine how else he managed to land so firmly on his feet!

I have mentioned the muddies a couple of times before. Back in May 2010 Peter Cook from the Medway Messenger ran a special feature in the local paper - click here to take a look. And in August 2010, I mentioned a book by F. G. Willmott called ’Cement, Mud and Muddies’. Most of what I know about the 'muddie tradition’ comes from this excellent book, apart from the many chats I’ve had with ‘village elders‘ in Stoke and those from much further afield. Their tales certainly bring home to you what a tough existence it was - but one that came with much camaraderie and life long friendships. Click here to visit that item. 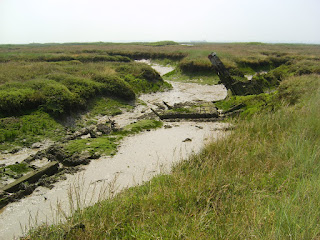 Stoke Saltings in more recent times.
The photos of the muddies appear courtesy of Dr. MacDonald of Stoke, whose long association with the Stoke Saltings is well known to many.

I will be mentioning the muddies again later this week, as former local resident Jill Warby (nee Mortley) has written a wonderful article about her great grandfather Sidney George Mortley, a well known local muddie, for the March edition of The Countryman magazine - available in all good newsagents!!!