Hoo St. Werburgh Parish Church will be hosting their second concert of the year, on Saturday 14 July. And there’s still time to get tickets!
Join local singing sensation Matthew Crane for an evening of popular music and entertainment. Click the poster below to find out more. 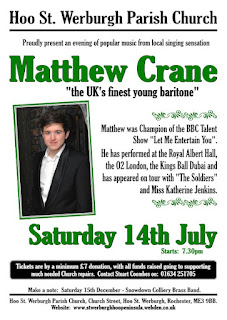 Although you can get tickets on the door on the night, don’t leave booking to the last minute as tickets are going fast. Tickets are by a donation of £7, so get in touch with Stuart on 01634 251705 as soon as you can to book yours.
Please come along and help raise much needed cash for urgent Church repairs. Visit the Church website by clicking here.
Posted by Tony Watson on Tuesday, June 12, 2012

Get yourself over to Grain for a murder mystery!

Following a successful panto run last year (I’m still singing the songs - I don’t get out much), the Showin’ Grain Theatre Group are preparing for a Murder Mystery production at the end of this month, on 29 and 30 June.
Click the poster below to find out more: 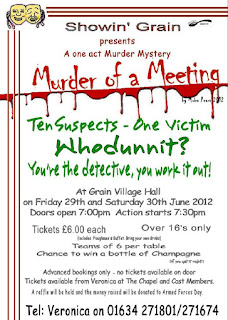 Pop along for a fun night - you might even be able to help find out ‘whodunnit’!
Posted by Tony Watson on Tuesday, June 12, 2012

Making a welcome return to RSPB Northward Hill tomorrow evening (Wednesday 13 June) will be The Rude Mechanical Theatre Company - with their comic mystery production of ‘Who Saw Marjory Daw’. 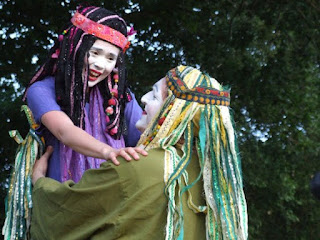 Set in the 1960s, the production is full of flower-power, free love, fashion and revolution. Following the character of Agnes Church as she leaves university and becomes a trainee journalist, the story concerns the disappearance of a young hippy - set against a backdrop of power politics and the Vietnam war. 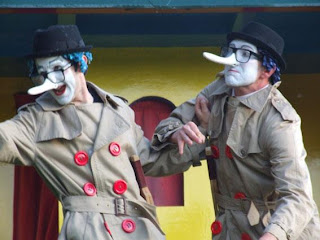 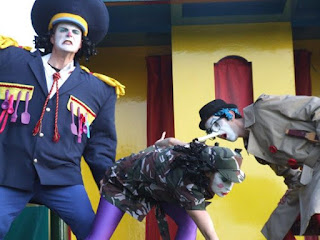 To find out more about what will be happening tomorrow night, or to book tickets, click here. Find out more about RSPB Northward Hill by clicking here.
Dress for the weather, although forecasters are predicting a dry and sunny day tomorrow (don’t hold me to that!!)
Posted by Tony Watson on Tuesday, June 12, 2012

Supplied by the RSPB:

As London prepares to receive visitors from across the globe for the 2012 Olympics, RSPB Cliffe Pools expects to welcome back its very own athlete of Olympic proportions. The nature reserve is an important home to wintering wildfowl and waders but also a summer breeding ground for migratory birds such as the common tern.

This sleek seabird of pure white, with a blood-red bill, black crest and swallow tail, has nested on the islands created by the flooding of the old cement works since they closed in 1970. As the world looked forward to the Seoul Olympics, back in July 1987, Roger Kiddie, a science and math teacher from Gravesend, rowed out to the tern colony at Cliffe Pools with Cliff Sharr, a local villager and renowned ornithologist on the north Kent marshes. The men spent the afternoon ringing the common tern chicks under a relentless attack from the adults. Common terns defend their nests aggressively, attacking more furiously those they recognise as repeat offenders. The chicks leave the nest almost immediately after hatching, so time was against the men. 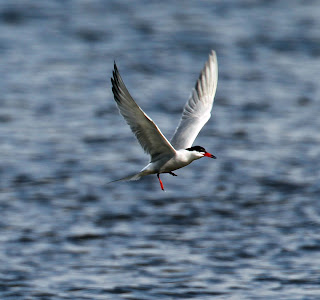 Common tern at RSPB Cliffe Pools by Les Foster (website)
Roger said, “Common terns spend their winter off the west coast of Africa, indeed, most of their life is spent at sea, so the chances of recapturing a ringed tern is always slight; but in the 1980’s ringing still presented the best opportunity for us to learn where these birds migrate to. We now know that common terns return each year to the colony from which they hatched, for Cliffe Pools that means an annual round trip of about 10,000 miles.”

The average lifespan of a common tern is 12 years so they rack-up a lot of sea miles, ably assisted by the Trade Winds and the unusual ability to replace worn-out flight feathers twice in a year.

In December 2011, a fisherman from Guinea Bissau, on the west coast of Africa, found a tern on his decks with an injured leg. Terns are known as sea swallows, their graceful appearance and dainty build affords them a different respect than the raucous gulls. The fisherman attended to the bird and returned it to the ocean in good health, but not before noting the details of a ring on its other leg. From this information, just received by the British Trust for Ornithology (BTO), we know that this tern was one of those chicks ringed by Cliff and Roger 25 years ago.

Roger has since retired, but continues to ring birds for the BTO. In the tern’s lifetime the Olympics have been to Barcelona, Atlanta, Sydney, Athens, Beijing, and with a little more luck, it is now wheeling around the Thames Estuary looking down onto the London Olympics. In its own feat of Olympic proportions this little bird (equal in weight to a tin of sardines and with a wingspan of just one human arm’s length), has now flown the same distance as from the Earth to the Moon!

Roger Kiddie said, “This has to be one of the highlights of my 40 years bird ringing experience, it is truly remarkable.”
Visit the RSPB Cliffe Pools website by clicking here.
Posted by Tony Watson on Friday, June 08, 2012 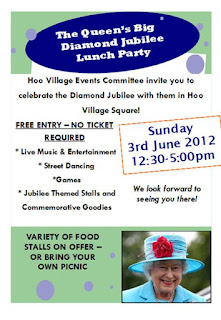 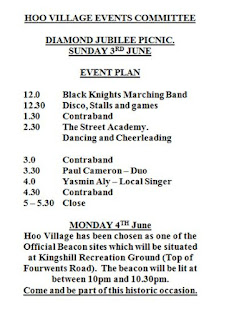 Whatever the weather - please try to pop along and have a great time.
And tomorrow, Hoo will be lighting a Jubilee Beacon at the Kingshill Recreation Ground - as part of a national network of Beacons. Click the image below to find out more. 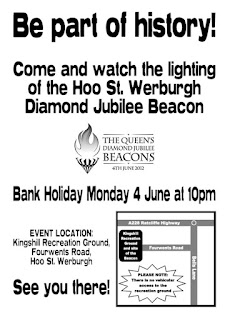