Your village needs you - at the August Hoo Clean Up!

The next Hoo Clean Up event is taking place this Saturday (25 August). 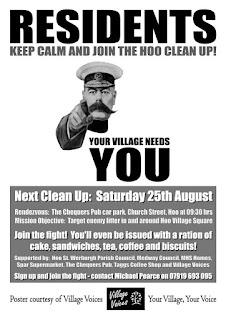 Starting out at The Chequers Pub at 9.30am, volunteers will clear litter from the centre of the village, including Church Street, Bells Lane, Main Road and Stoke Road. The session will end at 11am with free tea and cakes.
Take a look at the poster (above) to find out more, or get in touch with Michael Pearce on 07919 693 095. Take a look at the Village Voices 'facebook' page here.
Posted by Tony Watson on Sunday, August 19, 2012

There’s only a week to go now before the village of Hoo will experience its first ever Music Festival. At 4pm on Saturday 11 August Hoo Village Square will be buzzing with activity, but this time it’s all about the Music! 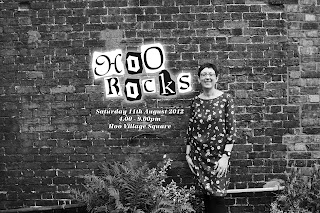 Photograph: Maureen Tong-Ralphs (Hoo Village Events Committee)
Courtesy of Love & Soul Photography
Opening the Festival will be Contra-band, a 5-piece rock cover band fronted by singer and local Peninsula Ward councillor Chris Irvine. At the weekend you can normally find the band belting out rock classics from the likes of Foo Fighters, Guns "N" Roses and the Red Hot Chilli Peppers in venues all across Kent. The band, who formed 3 years ago, is made up of Damien "Damo" Fawsett, Mark Fellows, Jason Challis and Brian Callar.

Followed by Janet Gabriel a.k.a Sugar Brown, a Kent-based singer and songwriter. She is the powerhouse vocalist behind Phat Medallion, a high energy disco tribute and party band that has thrilled audiences all over the UK and beyond. Janet will get you singing along and rocking Hoo with music from the 70s through to the 00s. Get ready for a scintillating performance and an afternoon of fantastic entertainment. Too hot to miss!!!
After Sugar comes Something Like Serenity made up of Myke, Ash, Damien and Sam who originally formed in 2005. They have played all over the country at a number of high profile gigs. This will be their first reunion after they each went their own separate ways for university.
Next on the agenda will be a solo performance from John Luchford. John worked as a Karaoke Host and entertainer in the popular resort of Marmaris, Turkey for 6 years before returning to the UK. In December 2008 whilst on holiday in the Dominican Republic he was involved in a brutal attack which left him requiring lifesaving surgery. Hoo Rocks will be John’s first live performance on a stage since the attack 3 years ago where he is hoping to reignite his passion for singing and entertainment.
Natasha Glean graduated in 2010 from the Trinity Laban Conservatoire of Music and Dance with a 2:1 honours in Musical Theatre. Natasha has played in various theatre roles during her studies but her real passion is singing and has recently performed for Soho London for the charity 17-24-30 No to Hate Crime campaign. Natasha is delighted to have been asked to perform at the Hoo Rocks Festival and we are delighted to have her!!
Last and by no means least is MELLO. MELLO started life as a number of collaborative tracks between vocalist Jasmine Bee and musician / producer Peter Owen, culminating in the formation of MELLO as a songwriting partnership in July 2011. Having entered the YouBloom international music competition, Jasmine and Peter discovered they had gained enough of the judges votes to pass over 2500 other bands and reach the annual finals of the competition. YouBloom asked MELLO if they could perform at the annual awards ceremony in London, so for this the partnership had to become a full band and so MELLO was properly born in April 2012.

Before MELLO Jasmine was vocalist with Drum and Bass band, Z-Electric, across London's club scene and Peter was returning to music after a number of years absence, having played previously in a number of 'local' South London bands and having focused on songwriting in the interim.
All in all we have a pretty fantastic show planned for everyone and guess what - it’s FREE. So put the date in your diary, tell your friends and family and come and join us for what promises to be a fantastic event! 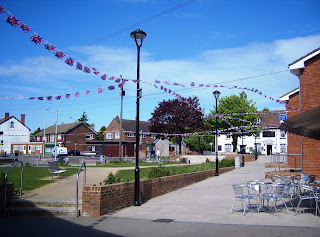 Can’t wait to see you at Hoo Village Square!!!
Posted by Tony Watson on Saturday, August 04, 2012