A Royal visit to Upnor

The below image appeared in 'The Sphere' on 28th July 1956 and shows leading boy Barrie Dimmock (pictured right), from Buckinghamshire, receiving an award from Prince Bernhard of the Netherlands during a visit he made to naval training vessel Arethusa in Lower Upnor. 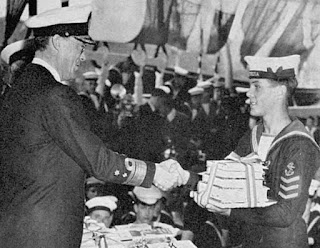 Cadet Dimmock was presented with the Rob Roy Cup and also received a number of other prizes.
Prince Bernhard toured the Arethusa, addressed the ship’s company and awarded numerous prizes to the assembled cadets. He also inspected a guard of honour and the ship’s band.
Arethusa was built in 1911 (in Hamburg, Germany), and was originally called Peking. She was purchased by Shaftesbury Homes in 1932, re-named Arethusa, and moved to Upnor in July 1933, where she became a training school and children’s home. In 1974, as Peking, she was sold to the South Street Seaport Museum in New York City where she remained until 2016 - when the ship was moved back to Germany. Peking is now undergoing a £23 million restoration and is set to become the flagship of a new maritime museum in Hamburg.
Posted by Tony Watson on Friday, December 25, 2020

Celebrating local heritage is something I enjoy doing - as you’ll see from the hundreds of posts I’ve written on this site since May 2010.

A community walk has been created by the Thomas Aveling Society to celebrate the pioneering Victorian engineer Thomas Aveling, who lived in Hoo as a boy, teenager and young man. 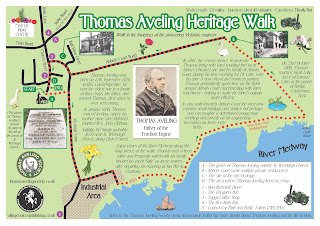 Thomas is often referred to as the ‘Father of the Traction Engine’. He’s known around the world for his Aveling & Porter Company of Rochester (based in Strood) - manufacturing iconic steam road rollers and traction engines.

Born in Cambridgeshire in 1824, Thomas moved to Hoo as a young boy, following the death of his father. He remained in Hoo throughout his teenage years and into adulthood - when he worked for local farmer Edward Lake (whose niece he would marry).

Thomas became internationally successful, but he sadly died prematurely in 1882, aged 57. He was buried outside St. Werburgh Church in Hoo.

If you’d like to download (and print out) a copy of the heritage walk, visit the Thomas Aveling Society website by clicking here.
Posted by Tony Watson on Sunday, May 17, 2020

The Bank Holiday weekend of 8th/9th/10th May was set to include a huge nationwide celebration to mark the 75th anniversary of VE Day - the end of the Second World War in Europe. 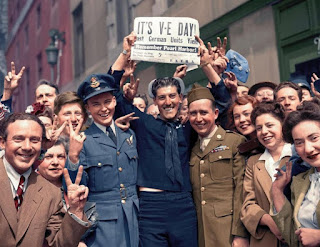 As a result of the Covid-19 lockdown - most celebrations have either been cancelled or postponed. Activities would have included street parties, exhibitions, parades and other community events.

The organisers of 'VE Day 75' hope to move some of the planned activities to the weekend of 15th/16th August (the 75th anniversary of VJ Day - Victory over Japan Day).

For more information and updates, visit the 'VE Day 75' website.

Many folk had intended to mark the 75th anniversary of VE Day by organising street parties. Some have now decided to arrange 'stay at home street parties' instead. 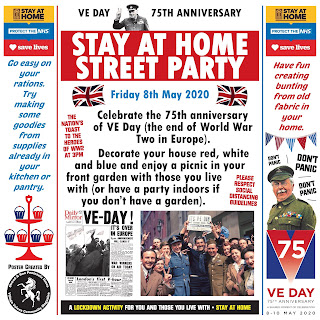 If you organise a 'stay at home street party' on 8th May - send your pics to Village Voices Publishing for inclusion in a future community magazine. Get in touch by emailing: office@villagevoicespublishing.co.uk

During these odd and worrying lockdown times, I'm going through my local history collection and archive. 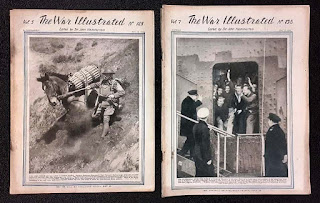 A few years ago I bought 49 copies of a WW2 magazine called 'The War Illustrated'. I'm checking each magazine to see if I can find any items relating to the Hoo Peninsula and Medway Towns - for inclusion in my local history columns in the Village Voices Community Magazine and the Strood & Hoo Peninsula Times.
Posted by Tony Watson on Tuesday, April 28, 2020

With most of us spending considerably more time at home (and in the garden) many people are enjoying the sound of birdsong - all day long! 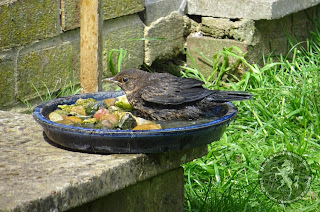 The Covid-19 lockdown has resulted in fewer vehicles on roads, almost deserted skies and a cleaner, more peaceful, environment. Birdsong seems amplified by the reduction in other noise.

Birdsong is really relaxing - the perfect tonic in these worrying times.

It's disappointing when people complain that 'birds are too noisy' or feel they're a nuisance because they might poo on a garden fence! 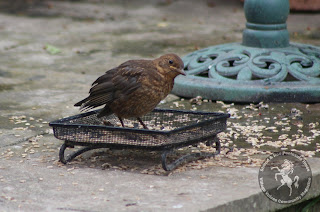 The Hoo Peninsula is best known for having a vibrant bird life.

Along with the wider Thames Estuary, the Hoo Peninsula is a vital migration hub for hundreds of thousands of wintering wildfowl and wading birds, as well as providing a summer breeding ground for migratory birds.

From garden birds to nightingales at Lodge Hill and herons at High Halstow - our local landscape provides rich pickings and a safe haven for many species. They enjoy hedgerows and gardens, farmland, waterways, wetlands, salt marshes, mudflats and woodlands.

This old photo was submitted a while back by Allhallows resident Colin Davis and shows the Old Black House in Allhallows. 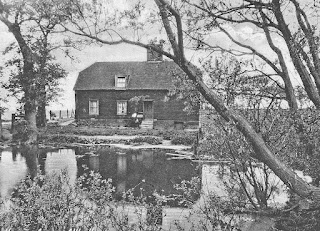 Although no longer standing, the building was near to Avery House (also known as Avery Farm House) where the main entrance of Allhallows Leisure Park is now located.

During its life, the Old Black House was apparently rented as the second poor house (in Allhallows) when the first (the former post office near All Saints Church) was no longer able to cope.

If you have any information about the Old Black House, please get in touch with me by submitting your details in the contact box (right).

No litter picks in Hoo for a while!

The monthly Hoo Clean Up litter pick is on hold until further notice. 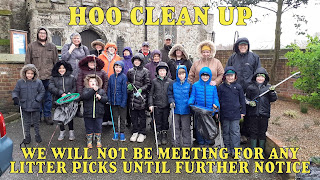 These days the group is very much a positive social gathering for a small, but enthusiastic, bunch of residents.
Posted by Tony Watson on Monday, March 23, 2020

Please print out this poster (or note down the details on some paper) and pass the details to any elderly and vulnerable residents who live near you and who may not be online (as they may not be aware of this support). 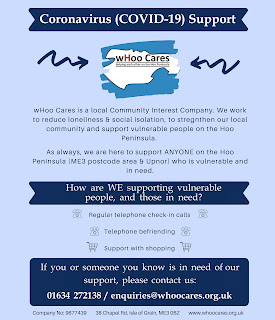 Well done to the volunteers and staff at wHoo Cares for continuing to provide such vital support at such a worrying time.

The Airfields of Britain Conservation Trust installed a memorial at Kingsnorth Industrial Estate near Hoo on 6th October - in recognition of where a Royal Navy Airship Station (and later RAF) airfield once stood. 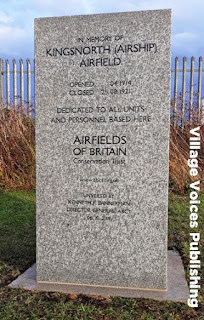 The memorial was initiated and privately-funded by Kenneth Bannerman from the Airfields of Britain Conservation Trust.

You can find out more about this memorial (and the work of the Airfields of Britain Conservation Trust) by clicking here.
Posted by Tony Watson on Saturday, February 29, 2020

Take a tour of Gad’s Hill in Higham

Don’t miss visiting Gad’s Hill Place in Higham. The building was purchased by Charles Dickens in March 1856 and is now part of Gad’s Hill School. 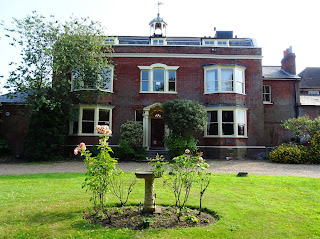 The Beacon of Beacon Hill

I recently went searching for the original ‘beacon’ of Beacon Hill on the Chattenden/Upnor border.

The beacon is a circular mound - with a diameter of around 30 metres. A WW2 pillbox was built on the 6.5 metre-high scheduled monument, but previously there would have been a fire basket or brazier (on a pole) on the top. The mound appears on maps as far back as 1570. 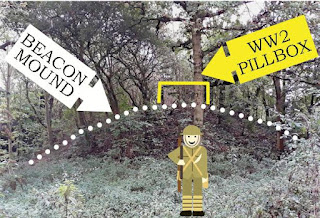 The mound is on private land, but you can walk near to it - just walk along public right of way RS116 at the end of Beacon Hill Lane. 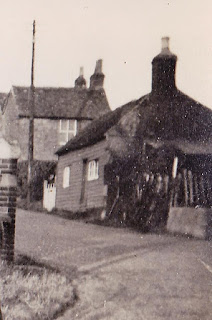 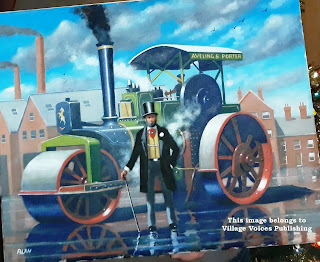