Many family mysteries are best left unsolved, but when the mystery relates to people long since gone, there really shouldn’t be a danger of causing anyone upset. This particular mystery starts some 177 years ago, so I think I’m safe.

Last week I met-up with Mick Edwards (pictured below), who has lived in Hoo all his life. We spent a couple of hours drinking coffee at TAGGS in Hoo village centre, talking about our shared Great-Great-Great-Grandmother Elizabeth Edwards (nee Watson). 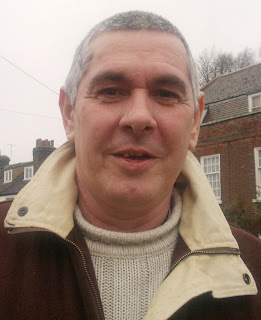 Elizabeth Watson married John Edwards in September 1833, when she was 19 years of age. Only months before the marriage, she gave birth in Allhallows to a son, John, who was given the surname Watson - her maiden name. I am a direct descendant of John Watson. Following their wedding, Elizabeth and John Edwards had other children, including a Charles Edwards (John Watson’s brother). Mick is a descendant of Charles.

Both Mick and I have spent many hours trawling through historic records to find out why John Watson was named Watson instead of Edwards, especially when there is plenty of evidence to suggest he was the son of John Edwards.

Does it matter whether I’m really a Watson or an Edwards? Of course not, but it’s quite strange to think of myself as Tony Edwards, if not for an ‘accident’ of birth in 1833.

Without the fantastic resources available at the Medway Archives and Local Studies Centre, none of this would have been known to us.
Posted by Tony Watson on Tuesday, January 11, 2011