ScottishPower this week received government consent to construct a new 1000MW gas-fired power station next to their existing Damhead Creek site, near Hoo (pictured below, courtesy of BBC Kent). 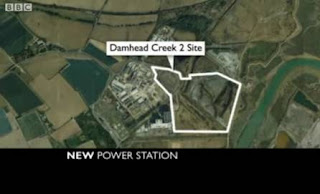 ScottishPower has said that the new £500m Damhead Creek 2 power station, which will be one of the most efficient in the world, could generate enough energy to power almost 1.5m homes. The plant will be built ‘carbon capture ready’ so that, eventually, CO2 emissions from the site could be stored under the North Sea.

In March 2009, ScottishPower said the plans for the new Damhead Creek site would inject an estimated £27m into the Medway economy and would support 1,000 construction jobs (over three years), with 50 skilled jobs created following commencement of operations.