Long before researching my family history, I always had a love of country pubs. Not just because they are where you find the best quality real ales, but because of the sense of history and community that they normally evoke, where people know each other’s names and everyone is welcomed like a local.

My father owned a country pub for a few years near Canterbury and other relatives have been connected to different pubs over the years. My mother's grandfather ran at least three pubs and his father worked in a rural brewery.

So it came as no surprise to discover a longer history of pubs in the family!

I’ve discovered links on my father’s side to a couple of local pubs. The Ship Inn at Lower Stoke, which I have mentioned before and The White Horse at Upper Stoke. I talked about my links with The White Horse in another post, but I thought I would add some further information about the time my Great-Grandfather was the licensee. 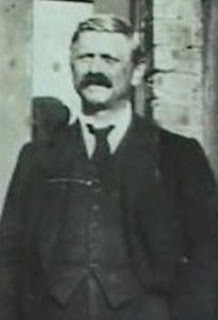 My Great-Grandfather Herbert Watson (pictured above) became the licensee of The White Horse on 11 November 1904. The licence was transferred from a William Bradley.

Herbert and Maud remained at the pub until 1 January 1907, when the licence was transferred to a James Rayner. I’m told the reason Herbert and Maud left the pub was because of financial difficulties, but precise details are not known. They left with only a tin-box of personal belongings seeking a fresh start in Dover. They went on to have eight more children, between 1909 and 1924. One of whom was my Grandfather!