I don't know when or where this rather interesting photograph was taken. I believe the older woman at the back is Susannah Watson (nee Theobald), who was my Great-Great-Grandmother. I believe the other people photographed are Susannah's daughter / daughter-in-law, but I am yet to work this out. Susannah lived in Stoke from the 1850's until her death on 23 November 1925. Her death certificate says that she died at "6 Gravel Pit, Stoke". A few days before Susannah's death, Queen Alexandra (Consort of Edward VII) died on 20 November 1925. 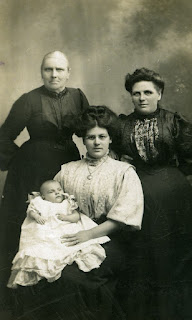