Janet Keates, from Cliffe, recently sent me a scan of an old 1950s newspaper, referring to a major dispute between villagers living on the Isle of Grain. The subject of the row was the siting of a toilet block in the centre of the village! 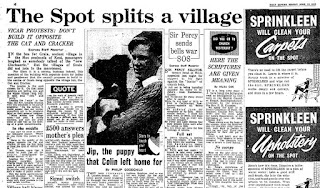 The story appeared in the Daily Express in April 1959. And if you want to know what happened - the toilets were granted permission and they served the community for many years, until being demolished in the 1990s.

In 2000, the Cat and Cracker pub and the Working Men's Club were also demolished, leaving the village with only one watering hole for the first time in a century (The Hogarth).

Another snippet of our local history.