Going for a song - Nightingales in North Kent

With half term fast approaching, I thought I’d share some information supplied by the RSPB about events taking place at Northward Hill:

Nightingales are back for the summer on the Hoo Peninsula, probably the most important site in the UK for this species, and now is the best time to hear their song. To celebrate their return the RSPB is hosting a series of guided walks at some of the best places to hear and perhaps see these shy birds. 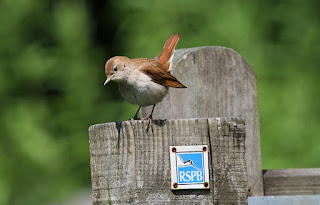 Alan Johnson, Kent’s RSPB reserves manager said, “Now is the time because once the male has found his mate he falls silent. I never tire from hearing the nightingale’s song and we’d like to give everyone else the opportunity. Despite the bird’s popular appeal many have never heard one singing and the birds are disappearing from our countryside fast!”

British Trust for Ornithology research has revealed that the UK‘s nightingale population halved between 1995 and 2008 and their distribution is retreating towards the southeast of England. The Hoo Peninsula is now, probably, the most important area for the species in the country. Well over 1% of the national population nests at Lodge Hill and there are healthy populations at RSPB Cliffe Pools and Northward Hill, Chattenden Woods and Blean Woods.

The nightingale, a charismatic avian lyricist, litters our literature as far back as the 8th century BC. Chaucer, Shakespeare, Shelley and Keats couldn’t resist writing about nightingales, and the alleged songster of Berkeley Square has itself been sung about by Vera Lynn, Frank Sinatra, Nat King Cole, and even Twiggy and Rod Stewart! Many people confuse song thrushes, robins and blackbirds for nightingales since these birds will sing by the light of a street lamp but the real thing is unmistakable.

A choice of guided walks are available to the public over the next few weeks and full details can be found on the RSPB website here, or by clicking here. You can also phone the RSPB office on 01634 222480.

Sunday 19 May, from 10am to 12pm
RSPB Northward Hill “Wild About You” Bird Ringing

Tuesday 28 May, from 7am to 9am
Great Chattenden Woods “North Kent Walking Festival” Walk*

Sunday 9 June, from 10am to 12 noon
RSPB Northward Hill “Wild About You” Bird Ringing

*A donation is appreciated, all other walks have a fee.

RSPB Northward Hill is well worth a visit, so please try and pop along to one of these events!
Posted by Tony Watson on Sunday, May 12, 2013