My first weekend of Christmas events . . .

Like many others in Hoo, I headed down to Hoo Parish Church yesterday morning for their Christmas Fair - the first of many Christmas events taking place locally. And despite getting there just after opening time, the place was already buzzing! 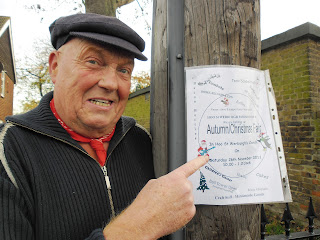 Hoo resident Alan Page.
It was good seeing Stuart Coombes and Mick Hollands (pictured below) handing out flyers for the Church’s special morning of carols, taking place on Saturday 17 December at 10.30am. Carol singing for an hour in the Village Sqaure followed by mince pies and coffee in the Church. 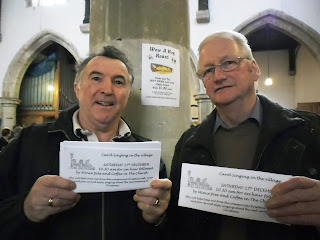 With festive tunes echoing around the Church, Ron and Muriel Bewsey (pictured below) were being kept busy cooking a hog roast which was clearly a very popular choice for many, especially with it being so cold outside. 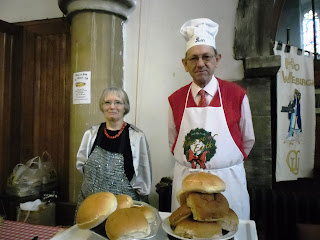 There were lots of stalls and raffles (I won a bottle of Sherry) and plenty of handmade crafts and local produce. I picked up some very nice looking Christmas cards of Hoo Parish Church.

Despite my enthusiasm for ‘cake tasting’ I managed to resist the temptation this time - even though there were more cakes than I had seen in one place in a long long time!

With that, and having caught up with local news and gossip, I headed over to the Isle of Grain to catch the Christmas Fair organised by GOFFS (the Grain Over Forty Fives group) at Grain Village Hall. There were lots of stalls, so I thought it best to catch my breath first and have a quick cuppa and bacon roll! 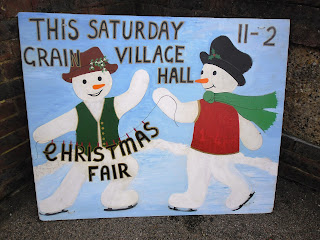 I had a good look round, but my nose seemed to be taking me in the direction of a cake stall at the far end of the hall. My earlier resilience was waning.

And they were fantastic looking cakes too! I had a good chat with the stallholders (pictured below) before finally giving in and buying four cakes which were neatly boxed up and kept aside for my collection later. 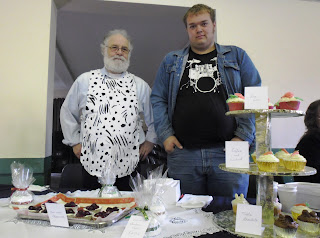 I had a chat with Veronica Cordier and Moira Pearn, who were on the stall for the Showin’ Grain Theatre Group. Moira (pictured below) is directing the panto, which will be performed on Friday 9 December and Saturday 10 December. I’m looking forward to hearing Veronica singing - I’ve been told she’s very good! 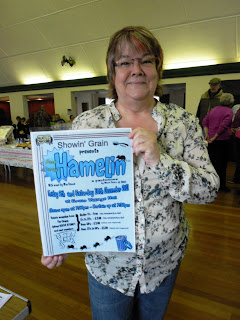 There were some really fantastic looking raffle prizes dotted around the hall, including amazing Christmas hampers - like the one pictured below on a stall belonging to Jenny and Pat (pictured below with Nigel). 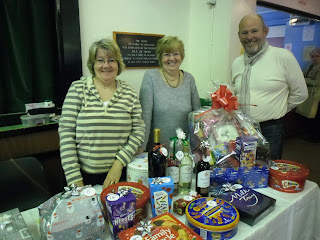 The two Christmas events in Hoo and Grain yesterday were really enjoyable and I’m looking forward to attending some more soon.

Don’t forget - click the ‘Christmas Event 2011’ label below to see all the Christmas events taking place locally (those that I have been told about anyway).

Sorry, but before I forget . . . no I didn’t leave my boxed up cakes behind!