All the fun of the Fayre!

I spent much of last Saturday in Hoo Village Square at the ‘Fayre in the Square’. I arrived just after midday and the square was the busiest I had ever seen it. There were plenty of activities and stalls to keep everyone occupied and the promised sunny intervals turned out to be quite long - with only a couple of rain spells to briefly dampen spirits.

One person that was particularly happy to see everyone enjoying themselves was fellow Hoo resident Ben Reeves (pictured below), who was with wife Jenny.

Ben was once Mayor of the City of Rochester-upon-Medway, from 1988 to 1989, and served as Deputy both before and after this as well. He represented Hoo for many years at both district and parish level. 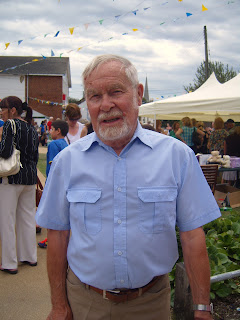 It was really good catching up with Ben, who I joined for a stroll around the square – talking about the history of the village and other local gossip besides!

The Hoo Village Events Committee (and all their helpers) worked really hard to make the Fayre in the Square such a great success.

I’m looking forward to their next event!