The monthly activity days at Grain Coastal Park have been going well since they were re-launched in January. Litter picking has been a key part of activities so far this year, and there is a good explanation for this that doesn’t involve litter louts.

The Isle of Grain is surrounded by open water, where the Thames Estuary meets the Medway, and litter is constantly being washed ashore. 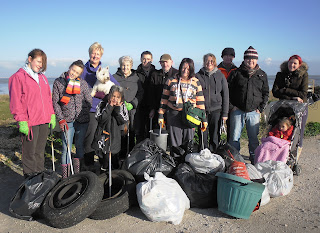 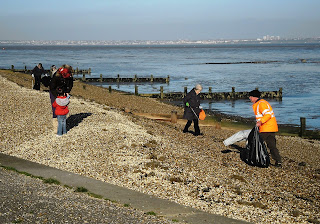 The next volunteer activity day was supposed to be held this Sunday (18 March), but as it is Mothers Day a good number of the regular helpers will spending time with their families. And rightly so! So just this once we’re going to have to cancel.

Diary dates for future chances to help out with the ongoing improvements at Grain Coastal Park are 15 April and 20 May. All sessions begin at 10.30am from our new meeting point: St. James Pavilion, Pintail Close (off Green Lane).

But if you are keen to help out sooner than that, my colleague Michael Dale is happy to hear from you. Get in touch with Michael on the number below.

More details will be included in the soon to be launched newsletter of the new Friends group. Watch this space, as a copy will be posted on this website.

In the meantime, if you would like to find out more about how to get involved with the Friends of Grain Coastal Park - contact Michael Dale on 01634 270314 or drop him an email here.
Posted by Tony Watson on Wednesday, March 14, 2012