The Battle of Grain

Many thanks to Michael Dale, a Parish Councillor at St. James Isle of Grain, who recently sent me a copy of an old newspaper article (pictured below), with the headline ‘The Battle of Grain’. 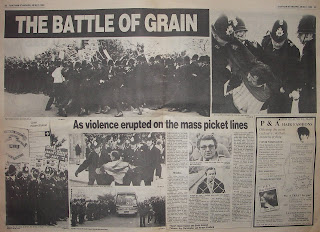 The article appeared in the Chatham Standard on 28 May 1980 and showed events that the newspaper described as 'Medway's most dramatic industrial clash'.

Michael was a Rural Police Officer here on the Hoo Peninsula, from 1966 to 1992, and has many stories to tell about his time on the beat, some of which I will try and share on this site very soon. If he’ll let me!